The Cold Dish, Death Without Company, Kindness Goes Unpunished, Another Man’s Moccasins, The Dark Horse, Junkyard Dogs all by Craig Johnson is available on Kindle, Hardcover, and Paperback. 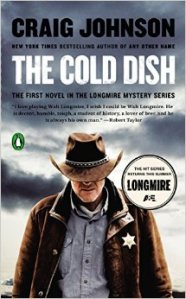 This Friday, I’m doing something a little different. I’m reviewing a series instead of just one book (because I didn’t want to sound too repetitive reviewing each book individually. I mean how many times can I say Craig Johnson is a super awesome writer? lol…).

I first heard of Walt Longmire as his TV persona in his namesake show Longmire broadcasted by A&E. I watched all 3 seasons in two weeks and was dying for more. I also found out A&E wasn’t picking the show back up and that got me upset since season 3 was left on a hell of a cliffhanger. But then Netflix came to save the day and picked up season 4 (whoot Netflix!).

Anyways, I say all this, because I was so impressed with the television show, I decided to read the books the series was based off. And so began my delightful journey through Craig Johnson’s amazing world.

Not to knock the TV series, because it is really good with fabulous characters who play the book characters exceptionally well, but the books are better.

Book 1: The Cold Dish… This is a slow start to the series and it takes awhile for the author to move the story along, but for what he lacks in forward motion, he sure makes up for in character development and gorgeous depiction of Wyoming. I kept reading out of pure curiosity of the aging Sheriff with a big heart who can serve up a big ass kicking. And the Cheyenne Indian Henry Standing Bear who is Sheriff Longmire’s best friend, runs a bar, and says wise things that make you go hmmmm. And a hot blonde deputy Victoria Moretti that has the mouth of a sailor and doesn’t take shit from anyone, not even her boss. And the list goes on with colorful characters you can’t help but love from the very first page.

This book centers around the death of a man from one of Walt’s past cases and takes the Sheriff on a dangerous trek into the mountains where Mother Nature can be as deadly as any man. The unexpected and tragic twist at the end was a huge driving factor for why I picked up up book two almost the next day (and made me fall hopelessly in love with the series- I’m a sucker for a good tragedy).

Book 2: Death Without Company… This book is a much faster pace and all the books from here on out are, but still takes the time to paint each scene with a vividness that makes this series unique and unforgettable. I think Mr. Johnson finally managed to find his groove, and he fits nicely in it. The second book is a great story as Walt Longmire must get to the bottom of a supposed “natural” death of a woman in the local nursing home and in the process learns some surprising things about his once boss, good friend, and ex-Sheriff Lucian Connally.

Book 3: Kindness Goes Unpunished… One of my favorites so far of the series, as Sheriff Longmire goes to visit his daughter in Philadelphia. Only the visit doesn’t go as planned and this out-of-town lawman must give out some western-style justice after his daughter is severely injured. I loved watching Walt’s reaction to the big city and the big city’s reaction to him. And it’s fun to see Deputy Moretti’s origins and her larger-than-life family.

Book 4: Another Man’s Moccasins… A gripping and gorgeously tragic story that is told in the present, but also in the past during Walt’s time in the Vietnam War. Present meets past as Walt finds himself in the middle of a ever complexing case of a murdered Vietnamese woman.

Book 5: The Dark Horse… Another one of my favorites. This time Walt must go undercover in the town he grew up in to find out if a man and a stable full of horses were burned alive on purpose, or by tragic accident. He has little in the way of evidence and the little town has a reputation for being uncooperative when it comes to law enforcement. Armed with only a “gut feeling”, and handicapped with his inability to tell a convincing lie, Walt must figure out a way to get to the truth.

Book 6: Junkyard Dogs… By far the funniest book of the series. This is a lighthearted story… well, up until somebody dies… actually a whole lot of somebodies, but this book is a fun read. It starts out with an old man tied to the bumper of a car who manages to take out a mailbox and gets up close and personal with a roadside ditch. And I have to say, things only get crazier from there. I love this book because as soon as you think you know what’s happening, nope… you didn’t know anything at all. Expect wild twists and turns that will leave you scratching your head, and a new found respect for junkyard dogs.

So yes, if you love a good series and love characters that practically leap from the page, these books are for you. You will laugh, cry, and have your heart broken, but you’ll love every second and beg for more. Check out this modern day western, because it doesn’t get much better than this.